Back to healthcare projects listed

Our hospitals and clinics

Our hospitals and clinics

We offer medical support to persons affected by leprosy through hospitals and clinics across the world. These centres are high quality places of healing which aim to support a person back to full health.

TLM’s hospitals are places where people affected by leprosy and other Neglected Tropical Diseases can go for treatment and support to enable them to lead a full life after being diagnosed with the disease. We are proud that our hospitals are recognised as centres of excellence that provide an exceptional level of care to leprosy patients, whilst also providing vital medical care to the local community. The hospitals help us work towards our three goals – zero transmission of leprosy, zero leprosy-related disability, and zero discrimination against people affected by leprosy.

India is home to the largest number of leprosy cases on the planet and is where the majority of TLM’s hospitals are located, with 14 hospitals across the country. These specialist hospitals provide treatment to cure people of leprosy and prevent disability through surgical rehabilitation and by helping patients manage any complications that arise; this all goes towards TLM’s commitment to seeing zero disability as a result of leprosy.

All TLM’s hospitals in India are recognised by the Government for their high quality and the standards of work they provide to the local population alongside the specialist leprosy care. This integrated approach helps reduce the stigma attached to leprosy as members of the local community interact naturally with people affected by leprosy and learn about the condition, symptoms, and misconceptions that surround leprosy.

The hospitals have a wide range of facilities; some medical skills needed to manage the symptoms of leprosy – such as skin problems, and issues with eyesight – are also useful for the wider population. Many hospitals therefore have dermatology and ophthalmology services that are open to the wider community, and some have additional services – such as obstetric clinics, dentistry, and trauma care – depending on the needs of that particular community.

Anandaban Hospital, 16km from Kathmandu city, takes a holistic approach to curing, and caring for, people affected by leprosy. Tucked away in the forest - Anandaban is Nepali for ‘forest of joy’- the hospital acts as a haven for peace and tranquillity for people recovering from leprosy and its complications.

Anandaban plays a vital role as the central referral hospital for leprosy complications across the whole of Nepal, and is one of the only places where people can access life-changing reconstructive surgeries. There are Government hospitals that provide treatment for leprosy and our satellite clinics provide immediate support to communities, but the kinds of restorative surgery, rehabilitation and disability-preventing support provided by Anandaban Hospital make a world of difference, not only in curing people of leprosy, but also restoring dignity and enabling persons affected by leprosy to return to full participation in their communities.

Anandaban Hospital provides the ability to mend people affected by leprosy in all ways – physically, psychologically and spiritually – and is known worldwide as a leading centre of excellent leprosy care.

DBLM Hospital was a part of Danish Bangladesh Leprosy Mission (DBLM) that started its activities in 1977. After Bangladesh gained its independence in 1971, Danish missionaries working in Bangladesh found that the north of the country (Nilphamari, Rangpur, Panchagar, and Thakurgaon districts) had high numbers of people affected by leprosy needing specialised care. With the blessing of the Bangladesh government and the gift of land, DBLM Hospital was built and services started. In 2006, DBLM left the country and handed over the hospital to The Leprosy Mission – though the name ‘DBLM Hospital' has been retained as it had a good reputation and was known and trusted by the community.

DBLM Hospital offers medical and surgical services for all the complications associated with leprosy, as well as serving those with other health problems in the four districts. Indeed, its reputation means that it attracts people affected by leprosy from right across the country.  The physiotherapy and assistive devices departments are also well used by adults and children with disabilities (leprosy and non-leprosy). There is a small laboratory which we hope to upgrade soon.  Attached to the hospital is a training unit and a guest house.

The hospital works closely with the Rural Health Programme and the Community Programme to provide holistic services to people affected by leprosy in North West Bangladesh. 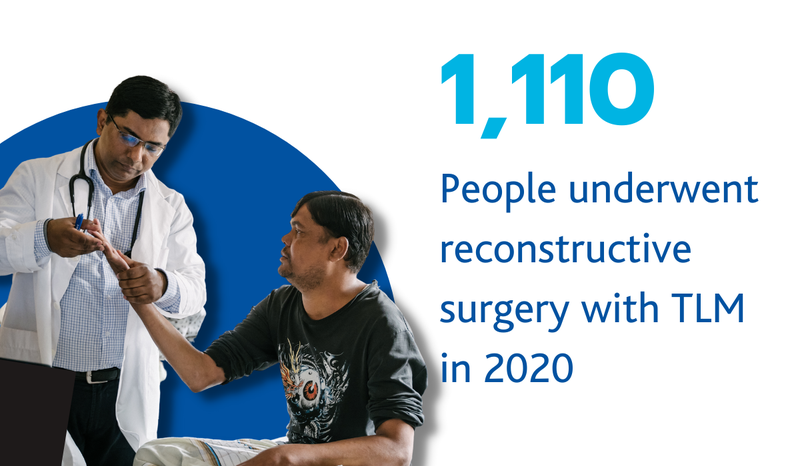 Around the world, The Leprosy Mission also has leprosy clinics that provide specialist support for the particular challenges of living with leprosy. For example, in Nigeria, close to a Government hospital, The Leprosy Mission Nigeria runs an Orthopaedic Workshop that provides assistive devices for people who become disabled through leprosy, other diseases such as polio, or accidents. This practical offering – providing protective footwear, callipers, ankle braces – can really improve the mobility and life experiences of people affected by leprosy.

Protective shoes, for example, can mean someone with leprosy can work again, as their sensitive, ulcer-prone feet are protected from damage and walking is made easier and safer. The clinic enables people to prevent further deterioration of their condition, helping persons affected by leprosy to maintain independence and quality of life.

In Sudan, TLM works closely with the Episcopal Church of Sudan to support the Aburoff Clinic in Khartoum. It provides leprosy treatment, eye care, wound care and treatment of leprosy reaction for people affected by the disease who travel from all over the country to receive this specialist care. Thanks to the work of the Aburoff clinic, persons affected by leprosy can lead full and blessed lives.

The Leprosy Mission works closely with many partners throughout the world, including partner Hospitals like Mawlamyine Christian Leprosy Hospital in Myanmar. Established in 1894 following a visit by Leprosy Mission founder Wellesley Bailey, Mawlamyine is one of only three places in Myanmar where people can get leprosy treatment and the only place in the country where reconstructive surgery and pioneering ulcer treatments take place.

The Leprosy Mission partners with Danja Hospital in Niger. The hospital is located in the Maradi Region of Niger and provides complementary services to the National Leprosy Control Programme of the country, as well as providing other health services. They are a welcoming centre that provides high quality care, including the diagnosis and management of leprosy. Their services include physiotherapy, ulcer/chronic wound care, and general consultations.

Although the number of leprosy cases globally is slowly declining, there remain around 200,000 new cases reported each year, according to the World Health Organization.

As part of TLM’s commitment to seeing zero leprosy transmission, we work hard to find new cases of leprosy – which isn’t always easy, as sometimes people are asymptomatic, i.e. without obvious symptoms, or live in remote and inaccessible areas where access to healthcare is limited. These cases won’t have been included in the reported new cases, so it’s important to seek them out; finding cases means TLM can help individuals and communities receive appropriate treatment quickly, preventing disability, and also reducing transmission.

TLM focuses on districts were leprosy is endemic, setting up ‘skin camps’ in affected towns and villages, where health workers visit areas to search for people with symptoms, and working with our research teams to find creative ways of detecting asymptomatic and early leprosy cases. For example, in Bangladesh, TLM is trialling a finger prick test, much like the one used to diagnose diabetes, which could revolutionise our ability to defeat leprosy once and for all.