Back to leprosy champions

U Soe Win went from feeling trapped in his home to speaking to leaders on the world stage. 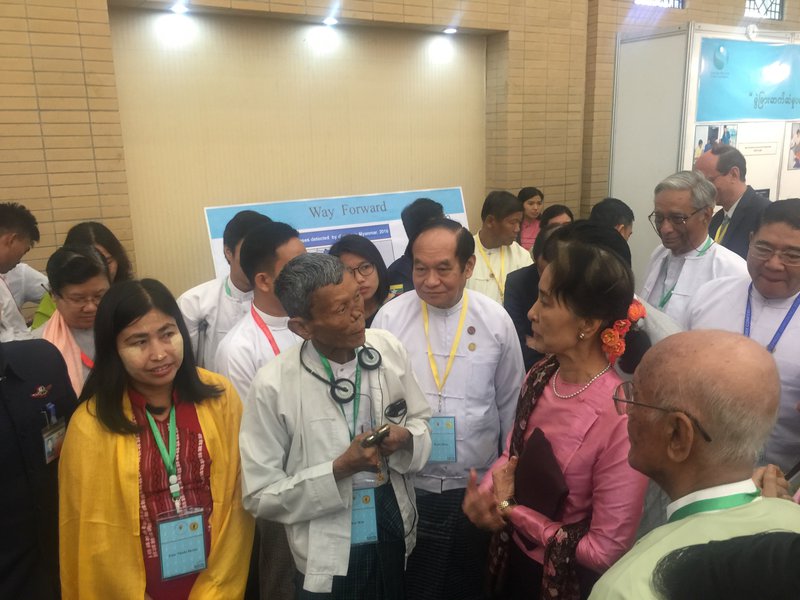 U Soe Win is from Myanmar. He’s lived with leprosy for nearly 40 years and in that time he has gone from someone who is ashamed to leave his house to standing in front of the United Nations and speaking to world leaders. His story is one of great sorrow and great joy.

Soe Win first noticed symptoms of leprosy in 1983, when he was 30 years old. However, it wasn’t until 1994 that he received the Multi-Drug Therapy (MDT) treatment that he needed to cure him of the disease.

By that point, leprosy had caused serious nerve damage, meaning that his toes and fingers had been damaged beyond repair and the bridge of his nose had collapsed. These leprosy-related disabilities marked him out visibly to his community as a person affected by leprosy.

Soe Win faced rejection from those around him

It was very difficult for Soe Win when his community saw him as a person affected by leprosy.

“I felt real pain and sadness during these years because people would look at me with disgust. I faced terrible discrimination from my community and so I started to avoid them. I spent most of my time hidden in my house.

“These days were so dark that I attempted suicide three times. My family did everything they could to support me and encourage me, and in the end I gave up on trying to take my life. It was a decision I took for the sake of my daughter.”

“One of the most painful memories for me was when my daughter was selected to represent Myanmar at the East Asia Rowing Championship in 1995. She was only 15 and travelled to Singapore to take part. I so badly wanted to join the crowds who went with her from the village to the harbour to send her off with a celebration. But, because of my appearance, I stayed at home; I didn’t want to bring shame on my daughter. I was so sad and disappointed in myself that day.”

The Leprosy Mission Myanmar changed things for the better

Our team in Myanmar visited Soe Win’s village to do an assessment. They invited him and two other people affected by leprosy to an awareness event in the community.

“I was shy at first, but the TLM team encouraged me. In the end, the event was transformative. Before it, very few people in my village knew much about leprosy and disability, but after the event, people in the village started to change their opinion of me. TLM told them that I had completed my treatment and there was no way for me to transmit the disease to them. They started to accept me again.

“TLM then started a self-help group in my community and they invited me to become the group leader. This gave me so much confidence; I was excited to do things for people like me, to be a part of a group that supported each other. My self-esteem was restored and I was finally able to stand proudly in front of other people again.”

Life has been a rollercoaster since those days

“Since those early days, The Leprosy Mission Myanmar have invested in me, equipped me with new skills and courage. With their support, I have travelled to meetings across the country, even across the world. I have represented people affected by leprosy at key leprosy events, I have met with world leaders, including Myanmar’s leader, State Counsellor Aung San Suu Kyi.

“Now I am proud to be an elected representative in my local community and to be the Chairman of Myanmar’s Association of Persons Affected by Leprosy (MAPAL). Next month I have been given the chance to stand before world leaders at the UN’s Conference of the State Parties to the Convention on the Rights of Persons with Disability. I will proudly stand and tell them of the lives of persons affected by leprosy and ask them to remember us in the work they do. I hope it will make a difference.”

U Soe Win spoke at a roundtable event at the UN’s CRPD Conference. The roundtable event looked at the rights of older persons with disabilities and Soe Win shared his experiences from Myanmar. He called for support to those who risk being forgotten, kicked out, allowed to go lonely and hungry because they are affected by leprosy.